Last week was an important milestone for Twelve Minutes. We revealed the trailer to the world at E3 2019,  with the goal of providing a glimpse of how this interactive thriller will feel when you play it. It was the culmination of almost a year of an iterative process to figure out the mood and tone. I would like to share some of that process.

Up until about two years ago, the development had been focused on the gameplay and design. Creating a system that allows players to express themselves, using the accumulated knowledge of each loop, as they learn more about the characters and the environment. Once this foundation was solid and actually working (can’t believe that was 4 years ago),  I started to shift my focus on the other elements that create the full package: writing, visuals, audio, and animation.

In order for these other elements to reach their full potential, I realized it would require help, in this case partnering with someone that had a similar creative vision and drive.
Since the early days of my discussions with Annapurna, we have always been in tune about what Twelve Minutes should be. They not only bring the know-how from their film industry background but enable the space necessary to work creatively (as well as listening to my wild 2 a.m. ideas).

We’ve known for a long time how it plays, so it was time to find out how it should ‘feel’. The best way to do so was to create a vertical slice that represents what Twelve Minutes is not only thematically but in tone and mood. In practical terms that meant figuring out the creative direction for the writing, sound, music, visuals, and animation.

And so we decided to create a trailer.

As an independent developer, spending precious production time on a trailer is not an easy decision. It means shifting development time and resources into writing, directing, recording and editing a small video in the hopes that it will convey very succinctly what the experience is about.  In our case, we already had a solid foundation (you can play from start to end with all the gameplay puzzles and story beats), so we knew that what we would learn could be directly used in the development.

I had never planned for voice acting, but now it was a possibility, so we asked ourselves, how much will it bring?
To figure it out, we went back to our original dialogues, that had been planned to be read, not heard, and carefully plotted the emotional journey of each character, what they would sound like and how they would express themselves. We then selected key scenes and looked for actors to play these out. Eventually, we had our first table reading session. 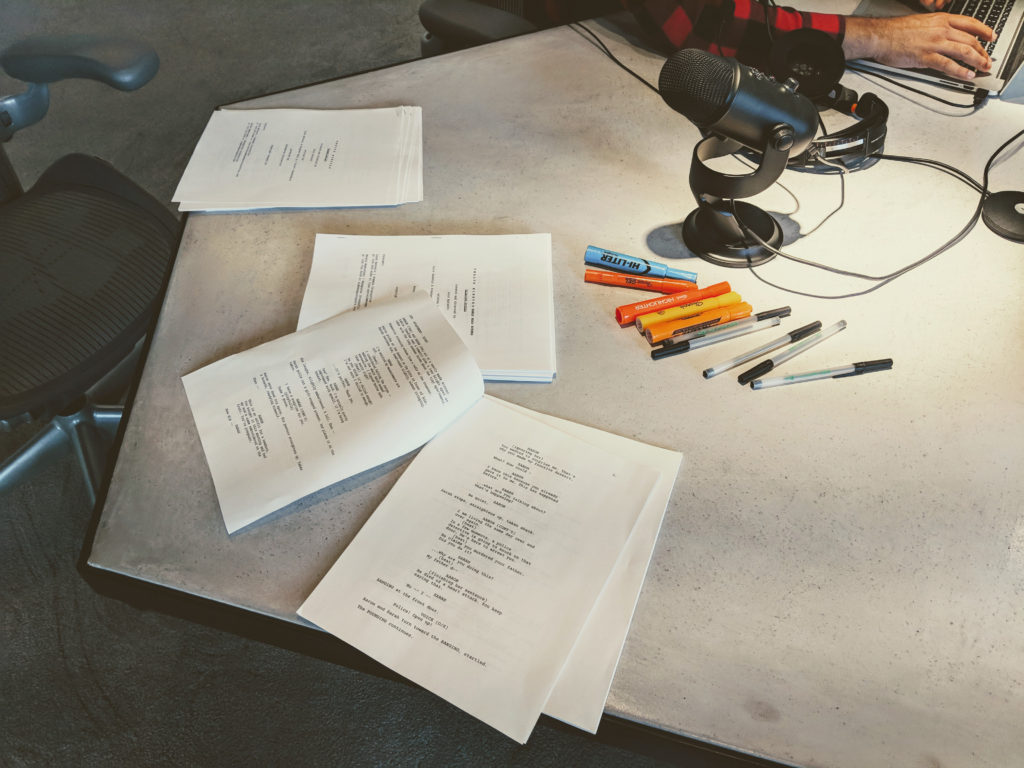 It was kind of surreal to sit in a room with actual living persons giving their time and talent to portray these fictional characters. It was a revelatory process that made me learn about the amount of subtlety that can be conveyed through voice acting. Suddenly, what we had written, that used to work, felt expository, flat and sometimes long and unnecessary. The characters read as generic and bidimensional. We also realized that the duration of spoken dialogue is much shorter than having it displayed on the screen, throwing off some of the timings on the twelve minutes loop.
We learned that we now have room for all these little quirks and expressiveness, and how a slight change of intonation can bring a new meaning to what is being said and what one wants. And so we started to iterate and expand, workshopping the beats of each exchange and the more we dug, the more intimate and rich these conversations became.

We then started a similar process for animation. How does someone move when they are happy vs defensive? How much does the body need/can convey from a top-down perspective with no facial expressions? We did a similar exercise to the table reading, looking at these selected scenes as real moments, putting aside gameplay restrictions. We asked ourselves, how would this play out if it was really happening?
We decided to schedule a motion capture session at MocapNow (with whom we’ve been recording the animations for the project). We also got a new set of actors, this time focused not only on dialogue but also movement, and we for the first time, we re-created the apartment to scale on a sound stage.

Seeing the apartment as a physical space allowed us to have a clearer understanding of the amount of room we have for interactions. The dialogue exchanges that were working from the table reading now required a new layer of expressiveness through movement. Once again we workshopped these on the fly, learning how to convey the truth of each character emotional state through movement.

This iterative process started to tell us who these characters are. We are bounded by the story and gameplay beats, but we had never defined the rest and we suddenly found this whole other deeper layer. How they touch, move and interact, hopefully bringing them to life and making you, the player, care.

The apartment layout, objects, and beats have to respect the gameplay and design, but the audio and visuals can have their own direction. We used these newly plotted emotional beats as a guideline. Figuring out the color palette that conveys the calm of an early evening before the ‘storm’ arrives, and slowly moving to colder and more aggressive tone as the ambiguity of the resolution/loop reaches an ending.

On the audio design, we went towards a dry realism, similar to Fight Club or Heat, and on the score we explored layering tailored twelve minutes pieces, expanding on the situation and character development, rather than being emotional and dictate how the player should be feeling. Almost like a breathing background, present but not over imposing.

Suddenly, being forced to explore all this for a trailer became a blessing. We had to be precise and succinct, and it was clearer to see if we were getting somewhere or not.
And all these practical changes (e.g. lighting, animation, audio) were added directly to the game, practically nothing was going to waste.
It even helped us improve the animation import pipeline, now that we had a lot more movement between more than one character, as opposed to the more technically minded previously recorded motion capture.

In the end, I was surprised for how much you end up caring about the characters once they are more fleshed out. We are so used to violence in the media that we quickly get desensitized when we are allowed to harm other people in videogames. By having this more personal and crafted environment, and slowing down the pace to something more relatable, makes the whole thing more intimate and seeing someone you care about being hurt, is definitely a lot less pleasant.

After we showed the trailer I heard quite a bit of ‘How does it play?”.  As a gamer, this is the most important question to answer and the first one I ever cared about. After all, this is an interactive experience.
No matter how much polish we put into this project if the core gameplay doesn’t work, it will never click with the player. And this is why all the positive previews we have from years ago are JUST from playing Twelve Minutes.
So for E3, I wanted to open with the tone and mood instead and thanks to ID@Xbox, who have believed in this project from the early days, we were provided with a room to show to the media how it plays, complementing the trailer reveal. 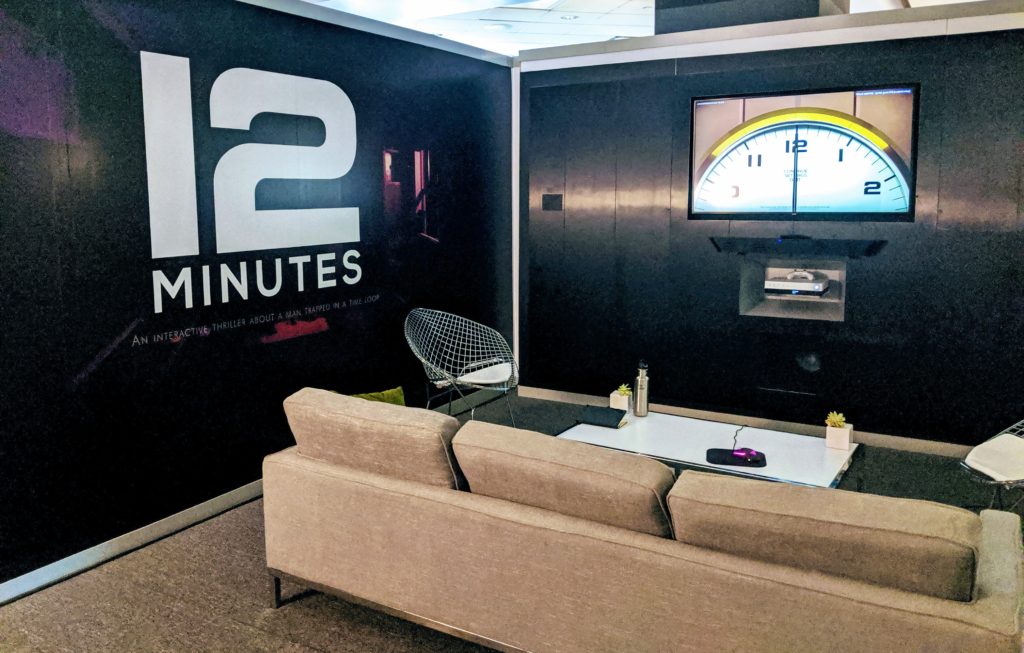 Throughout E3, from Monday to Thursday, we had the full experience available for the press to play, and I’m happy to report that everyone felt that it not only matched the trailer expectations but they realized its much deeper and intricate than what they thought (and the version that we provided had voice acting disabled and a lot of placeholder animation).
This leads me to believe that if we don’t screw this up over the next months, we should be able to make something very special indeed!

If you want to read more about how it all went, here are some of the articles that have been published so far:

The Guardian – 12 Minutes: time loop thriller rewrites the rules of adventure games.
GamesRadar – 12 Minutes might just be the closest we’ll ever get to playing a video game directed by Stanley Kubrick.
Kotaku – A Killer, A Secret, And A Time Loop Make For A Harrowing 12 Minutes.
Engadget – ‘12 Minutes’ is a murderous ‘Groundhog Day’
Variety – ’12 Minutes’ Is a Horrific Drama About Reliving the Worst Day of Your Life
Destructoid – A lot can happen in just 12 minutes.