PAX East has just ended and as I return to San Francisco, before I forget anything, I feel its a great time to go over the whole event.
I would suggest reading Willy Chyr’s (RELATIVITY) PAX East 2014 post-mortem, it helped me prepare and I won’t cover stuff that he already went over.

Twelve Minutes version at PAX had the full story and core content but art, animation, audio and dialogues were placeholder (I will be improved once I move into actual production).
This meant that the Indie MINIBOOTH was the perfect testing ground, an affordable way to have your game exposed to many gamers at once. 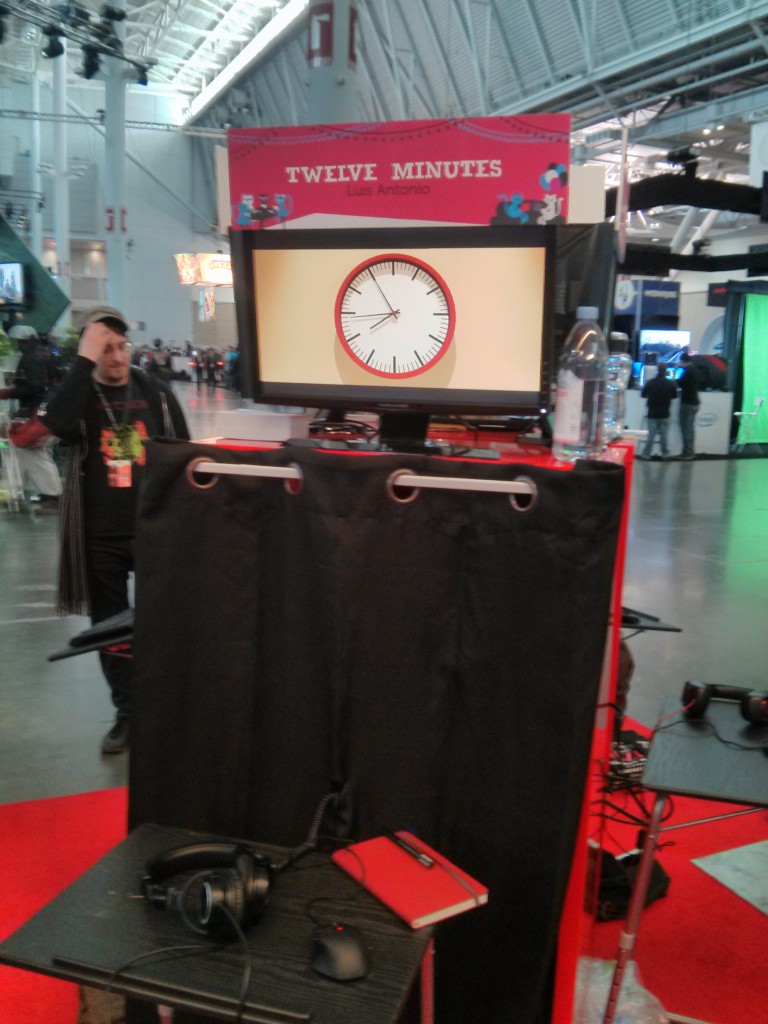 I was alone presenting Twelve Minutes so I couldn’t leave the booth unattended.
The Indie MEGABOOTH organizers and volunteers were impeccable, they provided me with water, food and helped out if I had to leave the booth for any reason.
In terms of accommodations, I decided to stay at the Boston Hi- Hostel. It’s at walking distance from the Convention Center, allowing me to do a morning walk before standing up for 8 hours. There were other devs staying there and almost everyone else was an attendee.

The Hostel has big windows and a nice fireplace, creating an inviting mood to chill out, drink tea and do some work if needed. 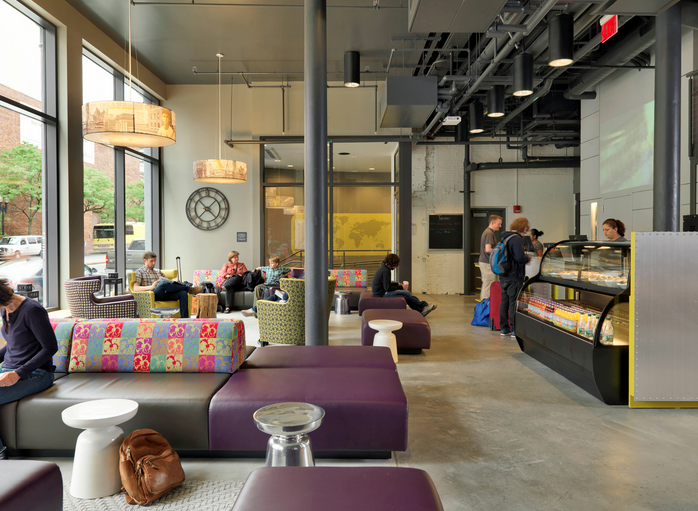 I also used this opportunity to hang out with other fellow developers. We all shared a common goal: a huge love for games and a desire to convey messages through this unique medium. Taking the time to connect, learn from their experiences and have feedback on your game was very important for me. 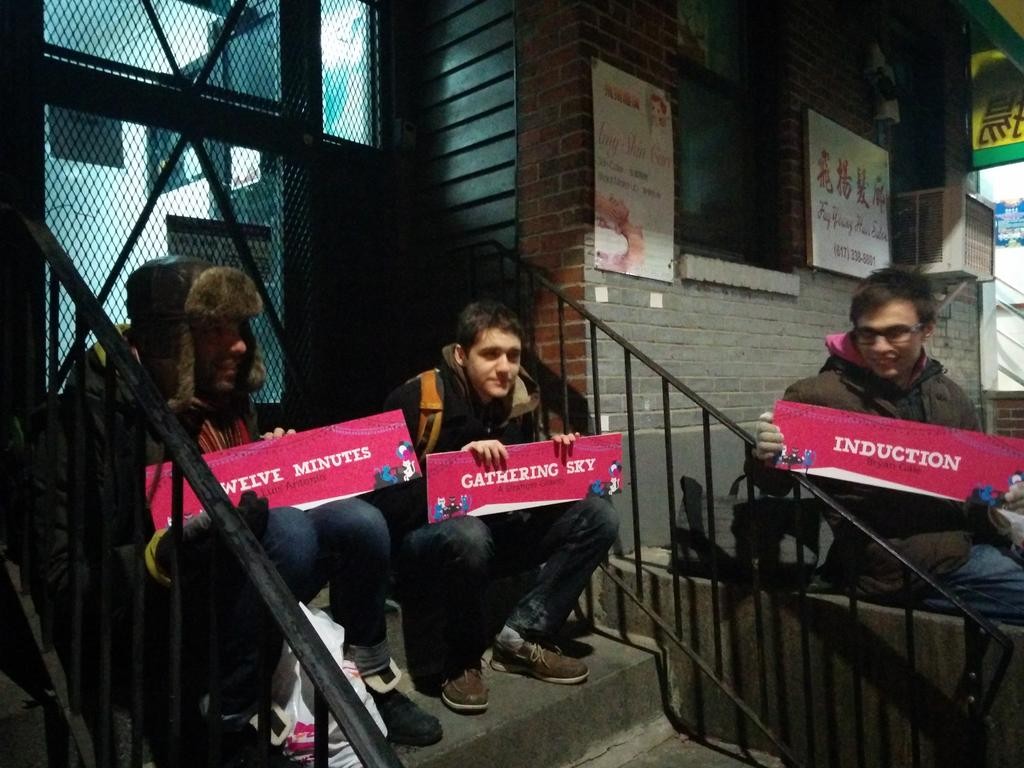 PAX is the perfect place to understand how the public will react to your game, attendees would stop and look at the monitor, trying to know what the game was about.
They were intrigued by the top down view and the lack of immediate action but without any explanation they wouldn’t try it. If someone was clearly interested I would approach them and explain the concept.

ME: “This is a game about a man trapped in a time loop”.
PAX: “Oh…you mean like Groundhog day?”

Which quickly made me realize I had to start with:

ME: “Do you know the movie Groundhog day?”

Through this constant back and forth, half way through the first day I had found the quickest, most efficient way to explain what the game is about:

At this point people would smile and get curious about the whole thing.

ME: “You come home from work and have dinner with your wife. A cop shows up, beats you up and you pass out.”
ME: “You then wake up at the start of the same evening.”
ME: “You now have to use the knowledge of what you know is going to happen, to change the outcome and break the loop.”

At this moment, everything would click and the smile would get bigger. If the cop was beating up whoever was playing the game, they would be clearly excited to try it out.

ME: “The loop lasts twelve minutes. The game is in real-time and everything happens in your apartment.”

I realized that the fact that everything is in real time was a big contrast to the classical adventure games. People enjoyed the fact that when you ‘Skip’ a dialog line you would actually speed up time to the end of it so you can’t be faster by clicking through dialogues.

ME: “Oh, and the game takes about 6 hours to complete…if you are good at puzzle games.”

Most people assumed that once you knock out the cop the game would be over so I wanted to make it clear that there is a LOT more to the experience.
The only issue that I would still have was that attendees would assume that the cop arrives at the 12 minute mark:

PAX: “So if you last twelve minutes and stop the cop you win the game?”
ME: “Oh no, the cop arrives about four minutes into the loop.”
ME: “It’s like if Bill Murray was getting killed at breakfast in Groundhog day.”
ME: “If he managed to survive he would then realize the loop actually lasts 24 hours and resets no matter what.”
PAX: “Oh…I see.”

The next question would usually be:

PAX: “So what is the objective? How do I know when I have ‘won’ the game?”

Which made me realize another aspect of game went unexplained:

ME: “The game never tells you what to do.”
ME: “There are no clear objectives, the idea is that you do what you believe is the right thing to ‘fix’ the loop.”

At this point people would want to try it out. I decided to let people play for as long as they wanted, allowing me to see what works or not.
In average people would play from 30 to 45 minutes, but what surprised me the most, was some attendees waiting over an hour to try it out. 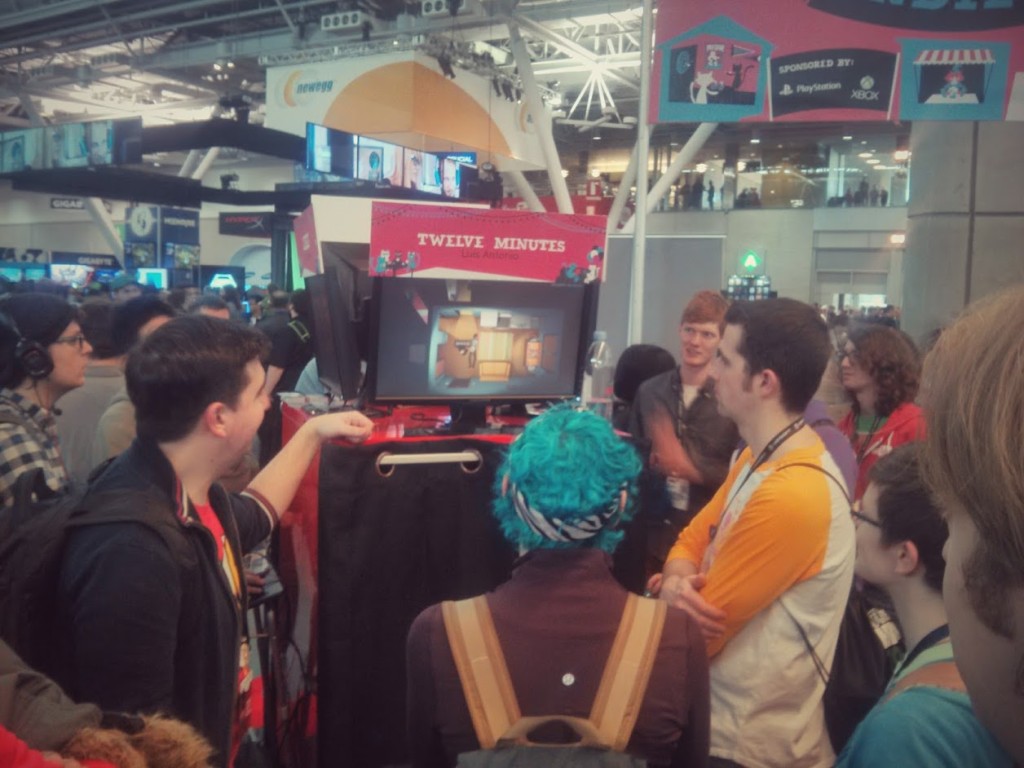 Having people play your game at this sort of event is very different from a Q.A. department. No one is being paid to do it and you are literally surrounded by many other games, all screaming for attention. This means, that if someone decides to give you 45 minutes of their time, you might be on to something.
I made sure to always have my notebook with me, take notes, and if time permitted, talk with the people about the experience. 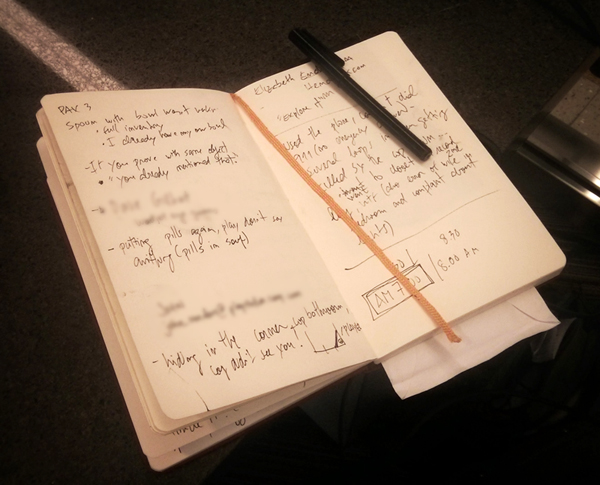 Here are some of the questions I would usually ask:

“Where you confortable with the control system?”
“Did you feel frustrated?”
“Was there anything you wanted to say to the characters that you couldn’t?”
“What were you trying to do? What was YOUR objective?”

At the end of the first day I had 4 pages of feedback. Once the expo floor was closed, I would go back to the hostel, prioritize the list and fix as much as I could until I was too tired to be productive.
By day 2 I only had a couple of pages with minor issues.
The prototype played all day long without any crashes or game stopping bugs.

A few weeks before the event we were given a list of all the press members that would attend.
I tried to email the ones I believed would be interested in the game, but being a relatively new project, I didn’t get that many replies, so I made sure that if I recognized someone I would try to at least tell them what the game was about.

Awesomely enough,  Vinny Caravella (without me realizing who he was) from Giant Bomb had a go at the game. They had a panel at the end of the first day and mentioned Twelve Minutes as a stand out at the event (starts at 20m25s):

Which I only found out through Rami’s tweet a few hours later:

I also pulled Stephen Totilo from Kotaku aside when I saw him, later realizing he tweeted about the game:

At first glance the indies at this year's PAX East felt like more of the same. But after a day of digging, I think I found some gems

@PetariJ 12 Minutes (Indie Mini Booth), Deathstate (also in the mini booth) and Kwaan all had some fresh ideas.

This meant that on the second day I started to have a line at the booth and people specifically looking for it. 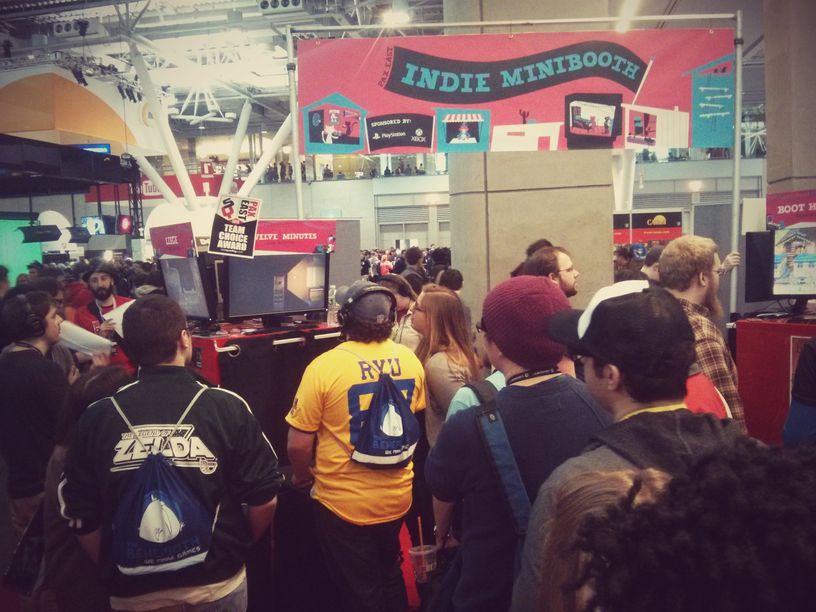 By the end of the second day I got an award from Sidequesting.com and previous players returning with their friends saying “You gotta try this game!”.
I also got a couple of people telling me “This was my favorite game at PAX!”, which, after three days of crappy food and back pain meant a lot!
At the end of the second day I was again mentioned at a panel. This time it was Greg Miller from Kinda Funny.
This brought even more people on the last day which ended with a great tweet from Polygon‘s Samit Sarkar.

There are less than 2 hours of #PAX left. My recommendations: Devolver for Not A Hero and the Indie Minibooth for Twelve Minutes. Go go go!

I was also invited to talk about my game at the Twitch Official PAX live channel as part of the Indie MEGABOOTH lineup, you can check it HERE: 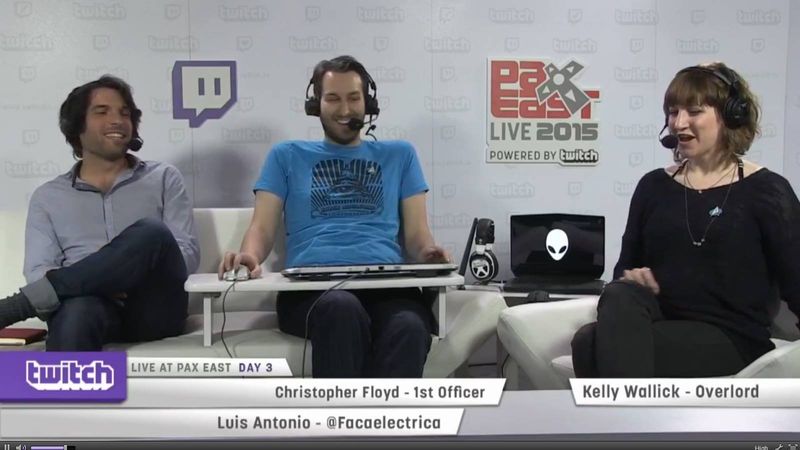 Overall, I couldn’t have asked for more. I feel the public and press enjoyed the premise  and wanted to learn more.
PAX East allowed me to understand Twelve Minutes from a fresh perspective. What I believed worked very well turned out to need change, while other things that I had been worried about ended up not being a problem at all.
Having this sort of feedback at this early stage will allow me to fix core issues that would be impossible once I go into full production.

Here are some of my takeaways from this experience. Hopefully they can be useful for other devs: 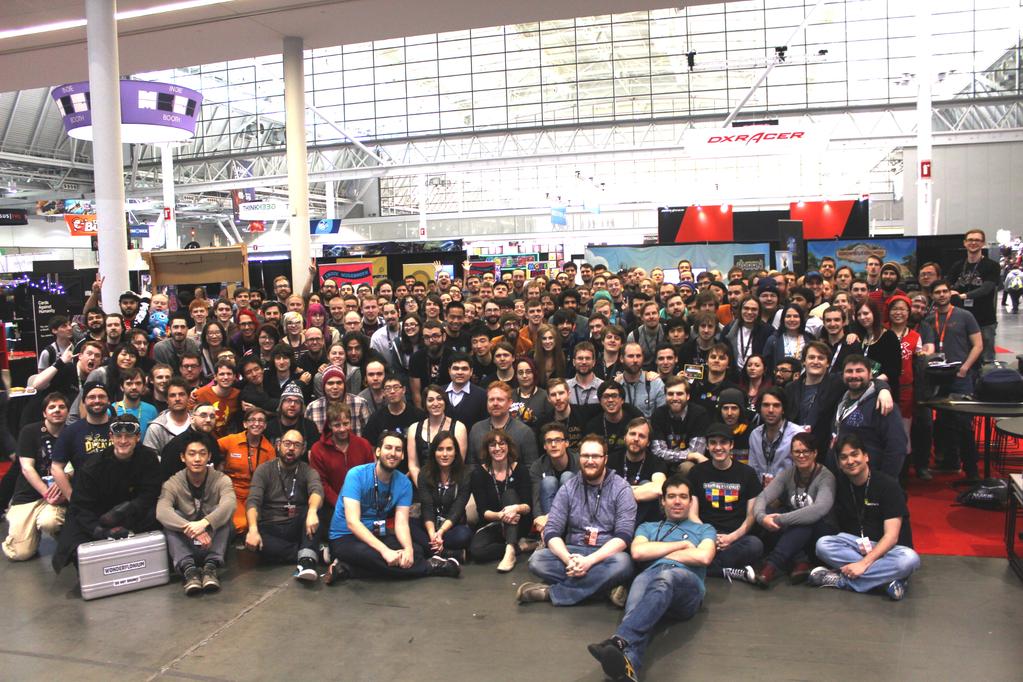